You are here: Home / TomT’s How to Survive in Survival Mode

BadgeHungry regular TomT has sent in a guide for Plants vs. Zombies, or as he likes to call it “How to Survive in Survival Mode”. He says that with this strategy, he can usually gain up to 8-12 flags in survival mode, although he often gets bored after round 4 or 5 and lets the game play out. Even so, he usually gains a rank each time he plays this way. Thanks TomT!

Plants vs. Zombies Strategy Guide: How to Survive in Survival Mode

Round 1 is always the same and you’ll need to deal with Regular, Conehead, and finally Buckethead Zombies. This is the round where you start to set up your lawn for future rounds. For this round I like to select Sun-shrooms, Puff-shrooms, Grave Busters, & Snow Peas. At the start I plant Sun-shrooms down Column 2 (2nd from the left) and Puff-shrooms in Column 5 unless there’s a grave on one of the rows in C5 in which case I start in C4 for that row. When the puff shroom renews place the next one behind the first one because having 2 Puff-shrooms in the same row is all that’s required to beat the Regular Zombies. When the zombies start appearing just be sure to have puffers in C5 & C4 for that row (or C4 & C3). In the meantime keep placing the Sun-shrooms down C2 and then C3 (unless you have a puff-shroom there due to a grave in C5). By the time you start planting Sun-shrooms down C3 you should have enough sun to use the Grave Buster and use that to remove the leftmost grave. After you get 2 puff-shrooms in each row keep planting them in the next column to the right as they renew and keep using the Grave Buster to remove the leftmost graves as it renews.

When the Conehead Zombies appear it’s time to start placing the Snow Peas in Column 1 (leftmost) in the row the coneheads show up in and between the Snow Pea & the puffers you’ll be fine. By the time the Buckethead Zombies appear you should have Snow Peas in every row and plenty of puffers which will also deal just fine with them although you may have to replace some puffers. By the end of Round 1 my lawn usually looks like this: 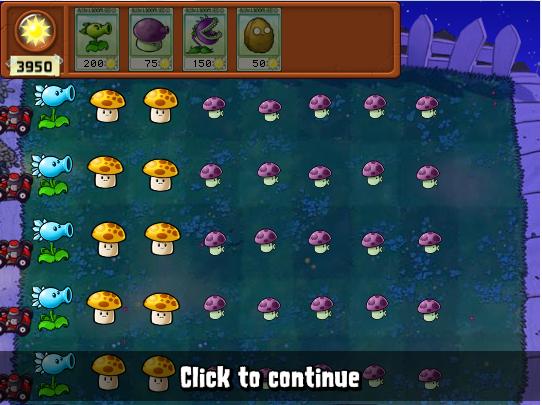 In Round 2 and beyond the zombies you’ll face will be more random and may include the dreaded Football Zombies. Even if the Football Zombie is one of the one’s you’ll face it’ll show up late in this round so you should have time to set up. For this round I select Repeaters, Fume-shrooms, Chompers & Wall-nuts. As this round progresses I dig up the puff-shrooms and replace them with Repeaters in C4, Fume-shrooms in C6 & C5, Chompers in C8 & C7 & Wall-nuts in C9 (the rightmost) with my ultimate goal being this setup: 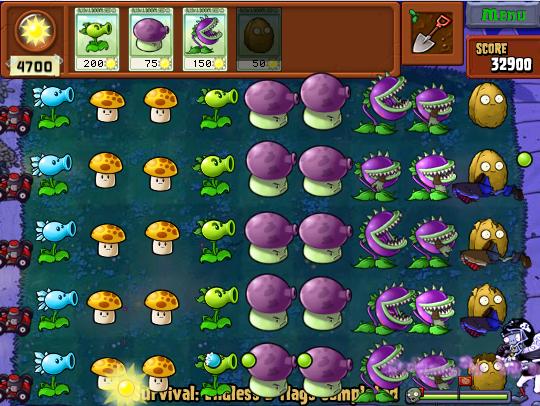 At this point you’re pretty well set up as the Chompers are the BEST way to deal with the Football Zombies and having them back-to-back means that while the first is digesting a zombie the Chomper behind it will chomp the first zombie to start eating the first one and, if there’s a Wall-nut in front of them, they’ll have more time to digest. The Fume-shrooms will take care of screen-door zombies as well as damage all zombies in their range (4 squares) and in the meantime the zombies will be pelted with the Snow Peas & Repeaters.

For Rounds 3 & beyond you’re usually in replacement mode since the Zombies will eventually overwhelm your plants but I usually select Fume-shrooms, Chompers, Wal-nuts, and Cherry Bombs (or Grave Busters if a lot of squares are overtaken by graves) and just keep replacing those plants for as long as I can.