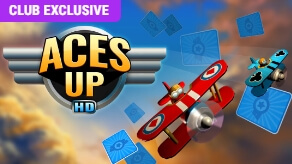 Play Aces Up! HD at Pogo
Badges for This Game
Posts about Aces Up! HD

This game replaced the original Java version of Aces Up on November 21, 2017.

Rank progress in Aces Up! HD is mainly gained by completing squadrons. When you get your jackpot spin, it tells you how many squadrons you have left until the next rank. A squadron consists of 8 flying aces, which are added at the end of a winning hand. You can receive up to four flying aces for winning the game and you also receive one extra flying ace for winning a hand.

If all four aces are out on your playing field, it is usually not a good idea to get them to the top of the four columns too early. The cards will tend to pile up and you’ll have to use all of your flying aces to shoot them down. Instead, leave a column open so that you can move cards in and out until all cards have been dealt.

If you have a large number of cards in the playing area once the deck has been dealt, see if you can totally eliminate one suit. (Look for the suit that has the least number of cards left and go for that one.) If you can get the ace of the eliminated suit to the top of one column and move the ace of another suit over of it, you should be able to win the hand without using any more flying aces. There should always be a card that can be shot down or moved to an empty column.