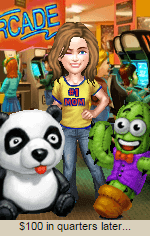 Where do you live?

The weekend open thread is a regular feature at BadgeHungry. Every weekend, we answer the discussion question above, and chat about anything game-related. It’s a great place to test the waters of commenting and introduce yourself, ask for help with a game or challenge, or talk about your games and make friends.