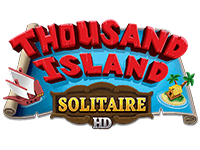 This is an update to the old Flash Thousand Island Solitaire game which brings newly remastered graphics and improved performance, while retaining the classic gameplay of the original.

This game has 100 ranks and 10 rank badges to earn. Earn ranks by delivering cargo. Each piece of cargo delivered earns you at least 10 rank points, and some up to 80 rank points for rarer items.

Go ahead and play the new, updated Thousand Island Solitaire HD, then come back and share your reactions and your tips for ranking up, earning badges, and more in a comment below. Thanks!