Update: this guide still works after the August 2017 update to Poppit! Bingo. To maximize your efforts, call your bingos only if they are within the first three bingos in the room, otherwise let the Cactus Cannon get any bingos you’ve covered at the end of the game.

In this video, I played one round of Poppit! Bingo and ended up with 299 Cactus Cash and 15 tickets more than I had started with. This can be used as soon as you reach level 3, but works best after Level 7. Watch the video to see the techniques in action and read below for details on exactly how they work:

To end up with more Cactus Cash and tickets than I started with, I employed these techniques:

This will require you to be at least Level 3, because it requires the use of the free power-ups which are unlocked at Level 3. It was originally mentioned by WESTSKPPY2006 in the comments, and in combination with my tips below it can bring you lots of bingos — and the XP, Cactus Cash, and tickets that come along with them! This technique works best when you play 4 cards (available at Level 7), and don’t worry too much about keeping up with calling bingo — the Cactus Cannon (available at Level 6) will pick up any bingos you miss.

In the first room, it’s likely there will be fewer players who have access to power-ups and fewer players with access to four cards. For some easy wins without spending a lot of tickets, try using this Golden Balloons Technique in the Pyramids of Giza room. Overall you will earn less XP, Cactus Cash, and tickets, but you’ll be spending less tickets and Cactus Cash too.

At the end of the round, use the Cactus Cannon. If you’ve got Golden Balloons, you will get a few extra bingos plus pick up the ones you may have missed due to falling a little behind. The Cactus Cannon may seem like a lot of Cactus Cash to spend all at once, but as you can see from the video, I started off with 5331 Cactus Cash. I spent 450 on the Cactus Cannon and after all was said and done, I ended up with 5630: a profit of 299 Cactus Cash.

Your Cactus Cash profits can be used to purchase power-ups when you run low or out, since the only ways to earn them in-game are to level up or win in higher rooms. As you climb in level you will probably deplete your stash. When you buy power-ups, buy the largest package to get the most bang for your Cactus Cash. 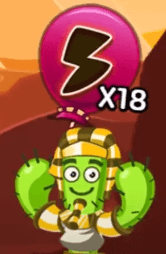 Do not pop balloons unless your power-up meter is active. While Spike’s balloon is inflating, just wait. This can be hard to do if you’re playing four cards and struggling to keep up to begin with. To alleviate this, you can memorize the numbers of the first three balloons and pop everything else. For example, if B4 is called and you have 2 of those on your boards and O67 is called and you have 1, then just remember B4 and O67 while you pop the numbers that are called next until the power-up meter becomes available. Once it does, pop the two B4s and O67 and your power-up will be immediately available. If a called number is on a Golden Balloon, that’s a great setup since you’ll only have to remember and pop one number to fill the meter when it’s ready. The point is to be able to use (or trash) the power-up as quickly as possible once it’s available so it starts recharging for the next one — more power-ups per game equals more opportunities to get ahead of other players.

As you can see from the location of my mouse pointer in the video above, I systematically check each column on the cards to see if the called numbers are there. While I’m scanning, I only look at the rightmost digit in the number. For example, for the case of G59, I am only looking for a 9 in the column. If I find it, then I check to see if it’s a 49 or a 59, and if it’s a 59 I pop it. I’ve found this is an effective way to play multiple cards.

Your mileage may vary, but I’ve found this to work very, very profitably most rounds.

Something that I didn’t do in the video, but is something I do now every time I play: hold your bingos. There’s no advantage to call a bingo beyond the first three in the room. If you don’t bother with calling bingo at all — or after the first three are called — you can focus on marking numbers and let the Cactus Cannon do its job at the end to add up every bingo you didn’t call.

Do not forget that you can just load the game every day to get a stash of tickets to use to play. When you first start your daily reward will be 5 tickets, but as you gain levels the tickets you are given will increase. For example, at level 0 you will receive 5 tickets daily and the fifth day will give you 15. At level 8, you will receive 35 tickets daily, with the 5th day giving you 105 tickets. The ticket numbers grow by level from there!

You will earn power-ups each time you reach a new Level in the game — that’s how I ended up with more than I started with in the video. Aside from the Cactus Cannon, you should only spend your Cactus Cash on power-ups, since you’ll receive plenty of tickets through regular gameplay and earn more than enough Cactus Cash as well (especially using the techniques above).

If you’re looking for a easy way to remember and collect your daily rewards from Poppit! Bingo and other games, check out the quick links on the Daily Rewards page under the Daily Links Menu here at BadgeHungry.

Do you have any other tips or techniques for Poppit! Bingo? Share them in a comment below.