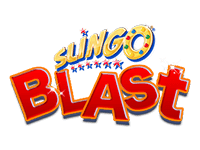 In the August 2016 Sunday Night Strategies for the “Shower of Points” badge in Slingo Blast which requires players to score over 60,000 points in one game 20 times starting August 17th, WilliamPorygon and TomT each shared their strategy for earning lots of points and scoring high. One is the Double-Horizontal Method and the other is the Combo-Slingo Method — these methods are unique, but either one will net you enough points to earn the Shower of Points badge as well as any future badge that requires a specific point score in Slingo Blast. Below are detailed instructions for both of the methods, badges you can double-up on, and another strategy you might want to try:

WilliamPorygon’s method for earning high scores in Slingo Blast is heavily dependent upon good timing, but when it works it’s really satisfying and can net you up to 250,000 points each time you clear the two Slingos to create a Blast-Chain, which — with practice — you may be able to do several times per game. If you get your timing just right, you can earn loads of points with his instructions:

Here’s a video of WilliamPorygon playing Slingo Blast, where he does the Double-Horizontal Method a few times, earning 1.6 million points — without power-ups: 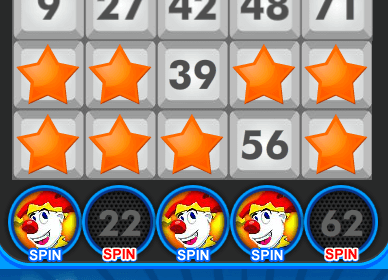 If you’re having trouble getting the timing right, it might help you to place the empty blocks adjacent to one another (see below) so you don’t have to move your mouse far to click from the bottom horizontal to the top at just the right moment. However, don’t click the upper block too fast before the blocks begin to fall, because if you do you won’t get the huge points at all.

In the Double-Horizontal Method setup to the right, the 56 and 39 are adjacent to one another, making it easy to click the 56 and then just as the blocks begin to fall, click the 39 for awesomely high points.

Combo-Slingo Method for Lots of Points in Slingo Blast

TomT’s method for high scores in Slingo Blast isn’t dependent upon timing, and may be the simpler of the two options for the Shower of Points badge since it will net you over the required 60,000 points but will not amass huge points like WilliamPorygon’s Double-Horizontal Method. In this method you’ll be setting up your board with what TomT refers to as “Combo-Slingos”, which are not to be confused with Multi-Slingos. Check it out:

If you’re looking to activate power-ups for high scores, use the Score Multiplier power-up. Other types of power-ups can be helpful, especially the ones that add extra Jokers to the reels, but do not activate the Cool Jokers power-up with either of these methods as it will automatically match an entire column in one click.

A great tip for earning power-ups comes from TomT too. Because this game awards you power-ups at the end of the game, you can literally do nothing except start a new game every 3 minutes and store up 6 power-ups to use in the future. And because of the technology Pogo uses to run this game, you can play it in one browser window while playing another game in another. He says, “just hit start game, go do or play anything else, and come back in 3 minutes and repeat.”

Double Your Efforts with Badge Pairings 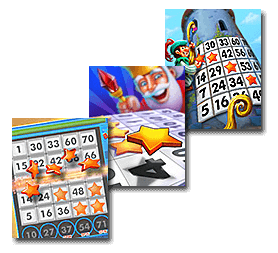 There are several other badges you can activate that are well-paired for these methods to knock out two (or more!) badges at the same time. If you’ve already earned these badges before, activate them again for some extra tokens. At the time of this post, these badges are currently in the vault, so they won’t be available to you unless you already purchased them previously.

These two badges are also good to activate if you’re doing the Combo-Slingos Method, as well as any badges requiring Diagonal Slingos, like the 2015 Pogofest (Oktoberfest) Limited Edition Badge, No Split Ends Badge (Mix-n-Match, April 2015) and the King Diamond Badge (Mix-n-Match, September 2013).

Free Guide to Pogo’s Toughest Badges
If you loved this, there’s a lot more you’ll love too. Get a free guide to Pogo’s toughest badges, plus more tips for earning more Pogo Badges, free Tokens, and free Gems delivered straight to your inbox. Sign up for the free BadgeHungry Insider Newsletter.

FADEDWILDROSE mentioned another way to earn high scores, by setting the board up for 4 Slingos at once. She wrote, “What does work for me is to make 4 slingos at once. That is vertical middle, horizontal middle, and both diagonals. To do this you leave the center block until last and be careful not to make any vertical or horizontals except for the central ones (if you get a number that would make one of the other verticals or horizontals, just spin it away).” Doing this once will earn you around 25,000-30,000 points, so you’ll need to do it at least in one game to score over 60,000. You may want to choose this method if you also need or want to complete a badge that requires Multi-Slingos: each time you complete the 4 Slingos, it will earn you 3 Multi-Slingos which the other methods will not.

Do you have another strategy for earning high scores in Slingo Blast, or are you going to try one of these? Let us know in a comment below.