You are here: Home / new / New: Update to Gem Packages

Pogo’s Gems page now has an updated set of Gem packages available for purchase. There are still 7 different Gem packages to choose from, but the amounts and their prices are a little different: 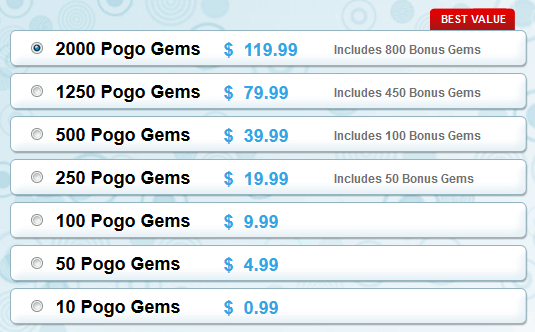 Here’s the per-Gem breakdown (rounded to the nearest tenth of a cent):

So, the more Gems you purchase, the better value you get for your money. These new bundles also reflect an increase in Gem costs for all but the smallest package, as previously the largest Gem package you could purchase (1000 Gems) broke down to 5.6c per Gem.

To see the packages for yourself, click on “Add Gems” in the upper right corner of Pogo.com or Club Pogo.

Note: this change does not affect the EA Game cards or their value.

Thanks to Debi for sending in the news!