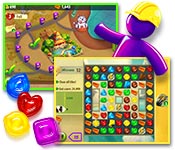 If you like Sweet Tooth or Bejeweled or those types of Match-3 puzzle games, you might want to check out Gummy Drop!. It’s a PC download game from Big Fish Games, but it’s free to install and to play. It’s the same familiar gameplay that you know from other Candy Crush-style games, but it’s got some neat extras that I really like.

At the beginning you’re just unlocking puzzle after puzzle in the first city, Sydney. As you play more, the game becomes more involved, with buildings you can construct, quests to do, more cities to unlock, super-powerful boosts and power-ups, daily events, treasure chests, and more.

In some of the Match-3 games I’ve played, you can replay a puzzle until you do well enough to get 3 stars on it (like Mahjong Escape), but in Gummy Drop! you can replay each puzzle in three increasingly harder difficulty levels. When you’ve completed each of the three difficulties, you’ll earn a satisfying green checkmark on the map.

Download Gummy Drop! for free and take these tips with you:

Collect all of the bricks! And when a guy pops up wanting to trade you coins for your resources (bricks), you might want to say no. You’ll need 6,500 resources to build the Chinese Garden of Friendship after puzzle 20.

And speaking of resources, prioritize building and upgrading the Resource Mart to begin saving up resources. This building will be able to generate resources while you’re not playing.

If you run out of lives, you’ll get more automatically in 15 minutes. You can purchase more lives with coins if you want to play more. Players who play a lot will want to purchase the “Life Lifter” ability in the store which will up your lives from 3 to 5. For those of you who are Big Fish Game Club Members (I am, and I know there are a handful of BadgeHungries who are too), you’ll save 30% on in-game items automatically.

When you see the treasure map in the upper right corner of the game, it means there’s a hidden treasure chest somewhere in that city. It’s shown on the map as a red X, just find it and click on it to collect a chest.

Save your boosts for when you really need them. In the early stages of the game, it urges you to use a boost either before or during a puzzle. You probably won’t need a boost during those first few puzzles, so click the boost just to get the tutorial text to go away and then click the boost again so you don’t have to use it.

This game is HUGE. There are 100 puzzles in each city (each of which can be completed at 3 difficulty levels) and there are currently 6 cities in the game and it looks like there will be more coming soon. It is going to keep me busy for a long time.

Give Gummy Drop! a try, let me know what you think in a comment below.

Disclaimer: This post contains affiliate links, which means that if you click on one of the links and make a purchase, BadgeHungry will receive compensation for your referral at no additional cost to you.