Currently, the only Pogo Parlor games are Zuma Slots and Bejeweled Slots, but more are coming in the near future, including the next upcoming game Chuzzle Slots, so here’s a primer on how the Coin Bucket system works. Betting and earning in all Pogo Parlor games is done with Coins.

When you load any one of the Pogo Parlor games for the very first time — and most of us have already done this with the release of Zuma Slots — you will receive 15,000 Coins (non-Club Pogo players get 12,000 Coins). This only happens once per account, not for each game in the Pogo Parlor. After 4 hours you can add more Coins to your Coin balance by loading the game and clicking on the Coin Bucket to refill it. Four hours after your last refill you’ll be eligible to refill again, and four hours after that, and so on.

If it helps, think of Coins as “Premium Tokens”: your Coin balance and refill timer are shared across all Pogo Parlor games, so you can only collect a refill from your Coin Bucket once every four hours from any one of the Pogo Parlor games.

The number of Coins you receive at refill time is based on how much you played after your last refill and what your current rank is:

After you receive your refill, spin until you’ve wagered as many Coins as you received. Free spins don’t count, you must wager Coins to spin for it to count towards emptying the Coin Bucket. You want to play enough to get your Coin Bucket down to empty. You can check this by clicking on the Coin Bucket in the lower left hand corner of the game. The pop-up will tell you if your Coin Bucket is high, low, empty, etc. When it’s empty the bucket graphic will be all light blue, with no green or red on it. See the image to the right here. You want your bucket to look just like that, so you’ll get your full refill amount when it’s refill time again.

While it’s not necessary, some players may choose to purchase Coin Packs in-game. This is the pricing for Club Pogo members: 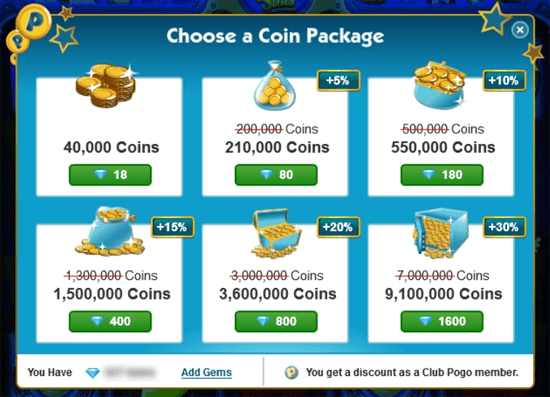 Update 4/21: this glitch was fixed with today’s maintenance.

A few players have recently reported getting a 24-minute refill timer instead of a 4-hour refill timer. This is definitely a glitch due to a programming error on Pogo’s part, and it happens to players starting at rank 30 and ending at rank 40. This glitch will most likely be fixed by Pogo as soon as possible, so be sure to use it if you have it. The easiest game right now to reach rank 30 in is Bejeweled 2 Slots.

Even though this appears to be a programming issue on Pogo’s end that should clearly end at rank 40, some players have reported their 24-minute timers reverting back to 4 hours after timing out of the game prior to rank 40. If you time out, you’d get the “Your Session has Timed Out”/”You’ve been neglecting us” error message. Since there’s no guarantee how long the 24-minute timer will last, it might be worth it avoid timing out by actively playing so you can keep the glitchy refills longer.

Are there any other questions we can answer about the Coin Bucket in Pogo Parlor games? Is there any other information you think should be included here? Leave a comment below.