You are here: Home / games / risk / How to Win Risk in Only One Turn

TomT has generously provided us with a write-up of his technique for setting up Risk so that you win in only one turn. TomT also suggests that this is also a good method for ranking up in the game since ranking up in Risk only depends upon Jackpot Spins and not on the game’s actual outcome.

When you load the Risk game page, start by selecting “Choose a Chat Room” so you can select a room and set up your own table, then follow TomT’s step-by-step below. Happy badging!

1) Set up a 3 player game by double-browsing or playing with a friend(s) and use these settings: 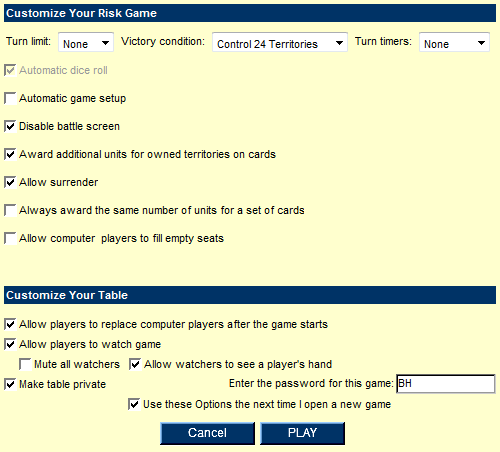 2) Once the second account joins the game you can start the game and only 1 bot joins in to fill the third seat. If the bot ends up winning the roll to start the game have the player you want to be the “winner” stand up and take the bot’s seat so that it starts first.

3) When selecting territories have the “loser” account select one out-of-the-way territory (one of the Australian territories works well) but select the other territories in a group where the “winner” can attack them easily. Here’s an example (with Red starting first and Green losing): 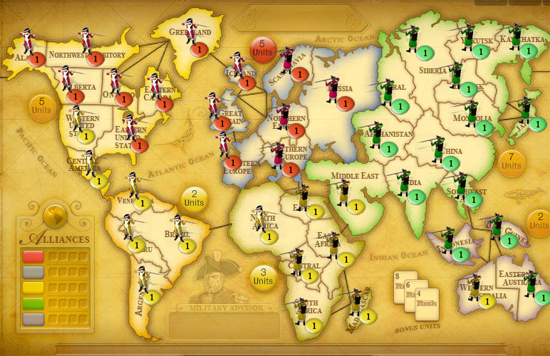 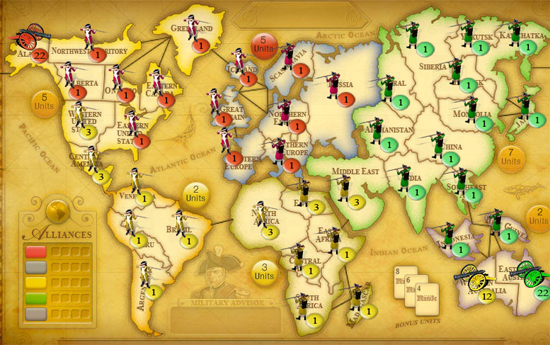 When the game starts everyone has 14 territories (since there are only 3 players) so, in my example, the Red player will place his starting reinforcements in Alaska and then take his 26+ armies and wreak havoc over all of the 1 army green territories in Asia until he wins 10 of them and then it’s game over and JP spins for all players.

As a side bonus for the “losing” player you can choose the Retreat option when attacking which, if you lose the first attacking roll, will result in the “losing” player getting a 50 token bonus for winning a battle in defense (against 5X odds) and you can repeat the process as often as you like since you can keep re-attacking territories until they’re conquered.

Have you used this technique to earn a badge in Risk? Let us know which one in a comment below. Please list the badge name for other readers who might be interested. Thanks!
Previous: On Sale: Retiring Premium Badge Albums
Next: Trivial Pursuit Daily 20 Answers: November 17, 2014
Comments are closed.