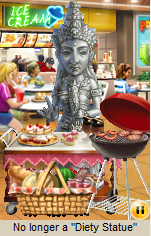 Last weekend’s open thread was a great success. Everyone shared the games we’d like to see Pogo make and to wrap up the weekend I went out and found some similar downloadables with a free one-hour trial to try out.

What have you accomplished on Pogo so far this year, and what would you like to accomplish before this year ends?

The weekend open thread is open! Use the comments here to answer the weekly question, or just talk about anything Pogo-related.