Scrabble Sprint is a fast-paced word-building game. To play, you form words of two letters or more off your letter rack. Each letter scores points and there are opportunities for multipliers on premium squares. You win the game by spelling as many words as possible to fill the board before time runs out. You earn xp in this game by building twenty or more 3+ letter words and/or by spelling one seven letter word per game. 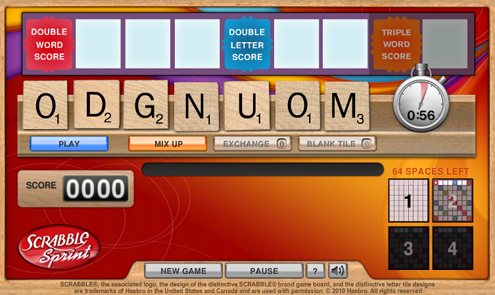 Updated 11/4: Pogo has stated they’ll make Scrabble Sprint available on “regular” Pogo.com in the future. For those of you wondering, they’ve said the same of Poppit Sprint.

Tumble Bees is the same game we know and love from Pogo.com. You earn xp in Tumble Bees on Facebook by spelling a 6+ letter word and/or an 8+ letter word.

If you’ve got tips on how to play these games, please share them with your fellow Pogo fans and leave a comment below. Comments on this post are moderated; only comments containing hints or tips about these games will be approved. Thanks for your cooperation!

Thanks to PurplePlum1 and WilliamPorygon for alerting us to these updates!