We’re getting closer to the release of Pogo Games for the iPhone! If you visit Pogo from your iPhone, you’ll now get this page: 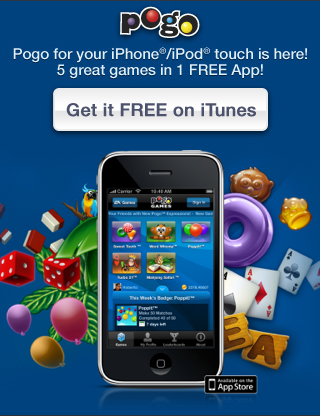 Update 11/3: iPhone users are no longer redirected to this page. Maybe release isn’t as close as we’d hoped…

Right now, the link to download takes you to the EA Tetris app, so it’s clear the app isn’t quite yet available for download on the iTunes store. Apple has an approval process that is out of the hands of app developers and sometimes takes a few weeks. Developers often have everything ready to go on their end — such as this kind of landing page — end while this process happens.

The appearance of this landing page on Pogo’s site means they’re getting things ready. It could be minutes, or hours, or days, or weeks, but the app is on its way. Getting closer!

Assuming this is a correct screenshot of the app at the time it was submitted to Apple for approval (and it very well may not be), we can glean a few things from the page:

We’ll let you know as soon as this app is available for free download in the App Store. Fingers crossed that it’ll be very, very soon!

Huge thanks to Groova for sending in this news!