You are here: Home / promotions and events / Win Pogo with McDonald’s Monopoly

Starting on October 5th, McDonald’s is having their yearly Monopoly sweepstakes and this year they’re giving away 5 million 3-month Pogo subscriptions as part of their instant win games. To get in on the action, you’ll have to visit a McDonald’s and purchase one of the following items that has an instant win game piece on the packaging: 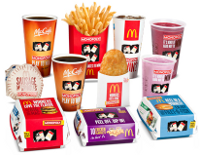 Cross your fingers, peel back the instant win, and hope you win one of the 5 million Pogo subscriptions up for grabs.

It’s only these instant win pieces that give you the opportunity to win a Pogo subscription. There is also a whole collect-and-win portion of the promo as well as an online promo where you can win other prizes. For more information on the instant win (where you can win a Pogo subscription) and the other aspects of the sweepstakes, check out the official McDonald’s Monopoly site.

Update 10/8: we’ve gotten reports you can only apply one 3-month subscription per Pogo account. 🙁

Previous: Crossword Cove Solution: October 2
Next: Red and Green Tikis for our Minis!